The recently listed John Brown Farm on North Haven hosts a variety of flora and fauna, as well as several notable buildings rich in history and character.

The homestead Farm House, with 1,600± square feet on the ground floor, has four bedrooms, two baths, a parlor, small “birthing room”, dining room, and large kitchen area; an attached annex that served formerly as a stable, an outdoor porch, a cellar dug with mules two centuries ago, with foundation and chimney supported by huge boulders and tree trunks, and an upper story that vividly illustrates how early 19th-century homes were constructed. Structural beams and boards are fastened with wooden pegs rather than nails. Tree “knees” support the sloped ceiling, just as they shaped the hulls of old sailing ships. Master bedroom, parlor, and dining room each have fireplaces that open off the central chimney, rebuilt in 1994. Graceful decorative columns flank the fireplaces and the exterior of the front door. A three-dimensional chair rail girds the walls of all main rooms, accented by a wide panel of pigmented paint beneath. Period “country” furniture presently fills the house. The kitchen stove, refrigerator, dishwasher have been updated; an ell off the kitchen holds washer and dryer. A modern Vermont Castings “Defiant” wood stove in the kitchen contributes extra snugness in winter to the building’s forced air heating system, driven by a new furnace. Views from kitchen and deck gaze over rolling meadows and orchard toward the sea. 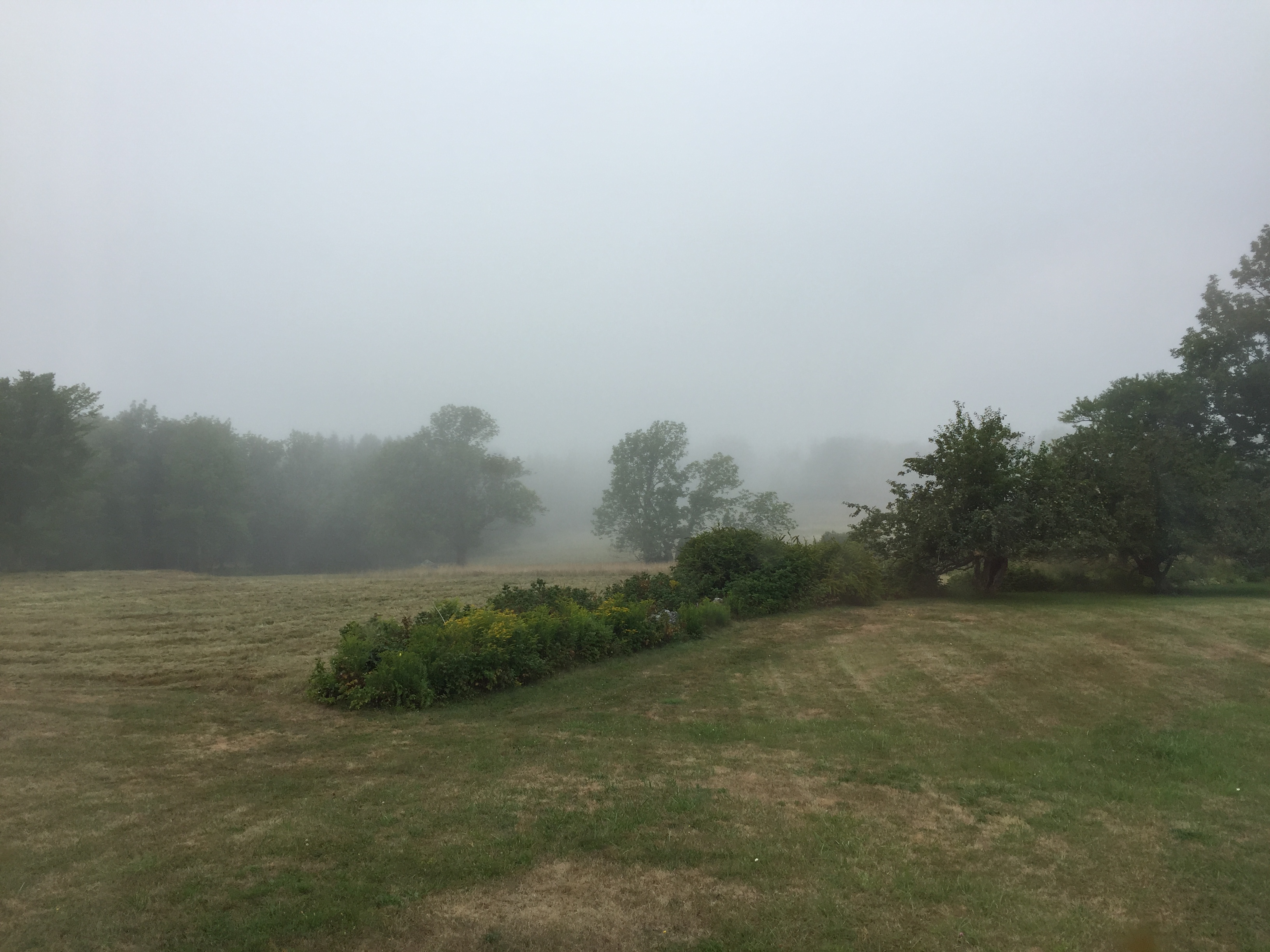 A shingled 575± square foot toolshed cum garage proximate to the house stores implements and materials for the vegetable and flower gardens (plus vehicles in winter), but also protects in its lee, against icy northern winds, a mini orchard of luscious peaches and other stone fruits. The property benefits from deep fertile loam (unlike most North Haven land, where bedrock typically lies within inches of the surface). Organic “regenerative” gardens, protected from deer browse by a 10-foot fence and constantly enriched with compost seasoned for a decade, overflow with bounty for the table. A centuries-old orchard delivers apples (around 20 ancestral varieties grow on the property, each with a different taste and texture), sweet cherries, ambrosial plums, pears for cooking, and an antique oblong cranberry in the adjacent bog. 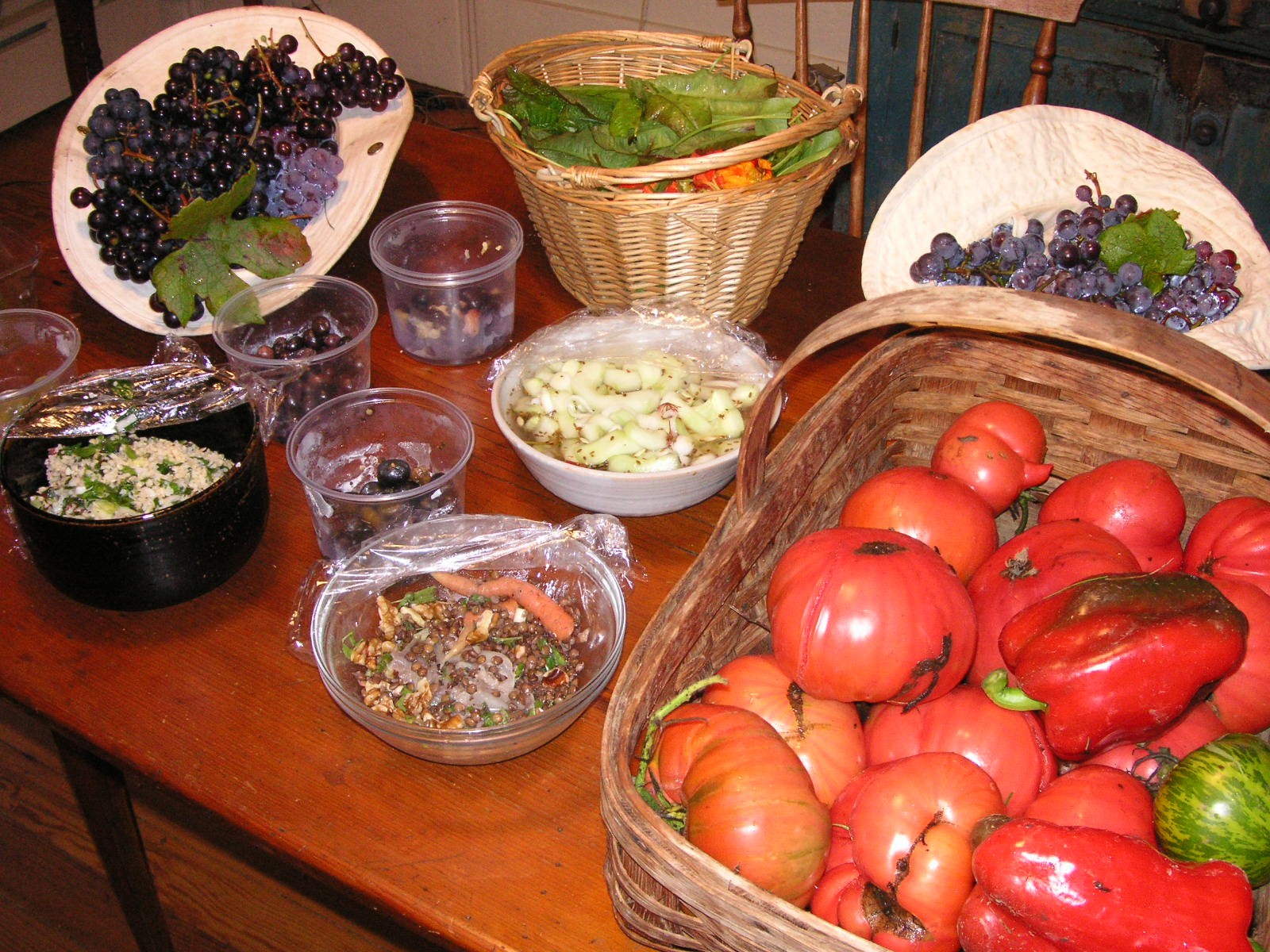 A full-size shingled barn stands at a short distance further up the Farm drive. It was built in 1989, with the exterior look of a traditional barn, classic 3-over-4 pane fenestration along both sides, and sturdy modern amenities: insulated paneled walls, a cement floor, quick hot-air heat (65° within 5 minutes in freezing weather), water, electricity, telephone, wifi, an attached exterior stable area, and a wood-fenced paddock for livestock. Although the barn presently stores farm equipment, and provides a snug interior for winter work projects and repairs, it could readily transition to an entertainment venue like those of many North Haven families, or be converted into an additional residence or an institutional learning center with offices. The large, uninsulated barn behind it, built in 2001 to store hay for the present owners’ Scottish Highland cows, has six bays, which might serve instead as off-season shelter for cars, boats, lawn furniture, etc. Within their 10± acre pasture delimited by high-tensile fence, the grazing cows do all the grounds maintenance, transforming the land into a veritable golf green by October. Water at the barns is supplied from a well house, built like a doll house, with flowering window boxes.

Interior graveled drives and soft footpaths, with wooden and steel I-beam bridges as necessary, meander throughout the entire property — past the old homestead cemetery, with its quiet, slanted light and touching inscriptions, where 29 Browns are interred; past a large, secluded meadow big enough to play soccer or lacrosse; a wisteria-covered arbor to rest within; a little woods pond, the outflow of which coaxes one to follow the colored spears of Japanese primula that have gradually spread along the banks of a little brook, wending through the farm’s large old hardwood forest (a welcome respite from the spruce monoculture that predominates elsewhere on North Haven). Ospreys, bald eagles, great blue herons, hummingbirds, and huge flights of migratory species appear in unexpected places (together with unusual animals). 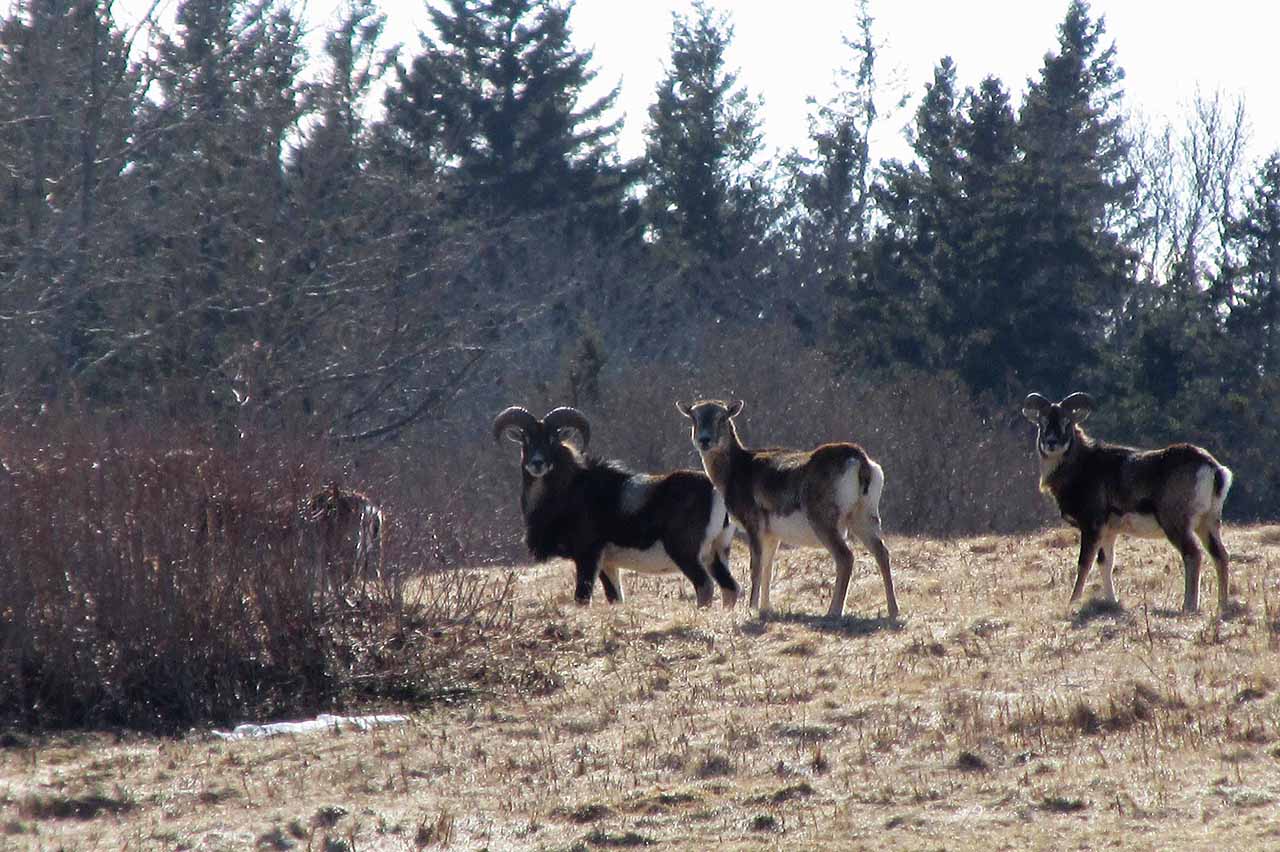 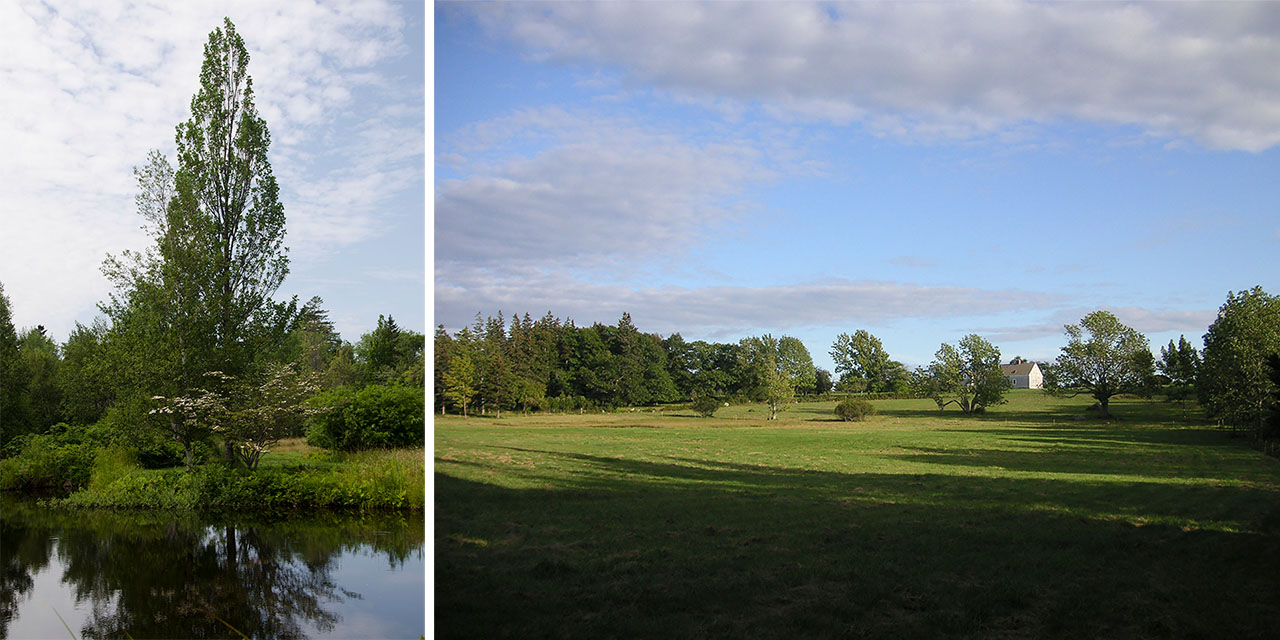 Like Jane Eyre and Rochester, destinations all over the property draw one on long walks through the grounds, as well as out to sea. Visit the five skeps that yield superb honey and comb — watch the bees rocket in and out of their hives, literally in the blink of an eye. The climate of North Haven island is much milder than interior Maine due to the encircling waters that warm in winter and condition in summer, surprising even plant professionals at the extended range of species that survive and thrive far north of their normal terroir. (Some of these plants, such as Taxodium distichum or Bald cypress, the trees draped with swampy moss in antebellum films and now found no further north than Delaware, exist in Maine’s fossil record, but were scraped off the surface during glaciation, never to return [6 specimens]. Another noteworthy example, once distributed worldwide, is the huge Metasequoia, a close relative to coastal redwood and giant sequoia of the American West [the world’s tallest trees], but presumed extinct for 5 million years, until a sole survivor was discovered in a Hubei [central China] monastery by Arnold Arboretum in 1948 — the Farm has 5 specimens, ascending to the sky.)

Other features might readily be added on the ample grounds, such as a tennis court beside the orchard, where many a badminton net has risen. Or a secluded place to shoot skeet. There is enormous scope for celebration, parties, and special events, as well as simple relaxation. 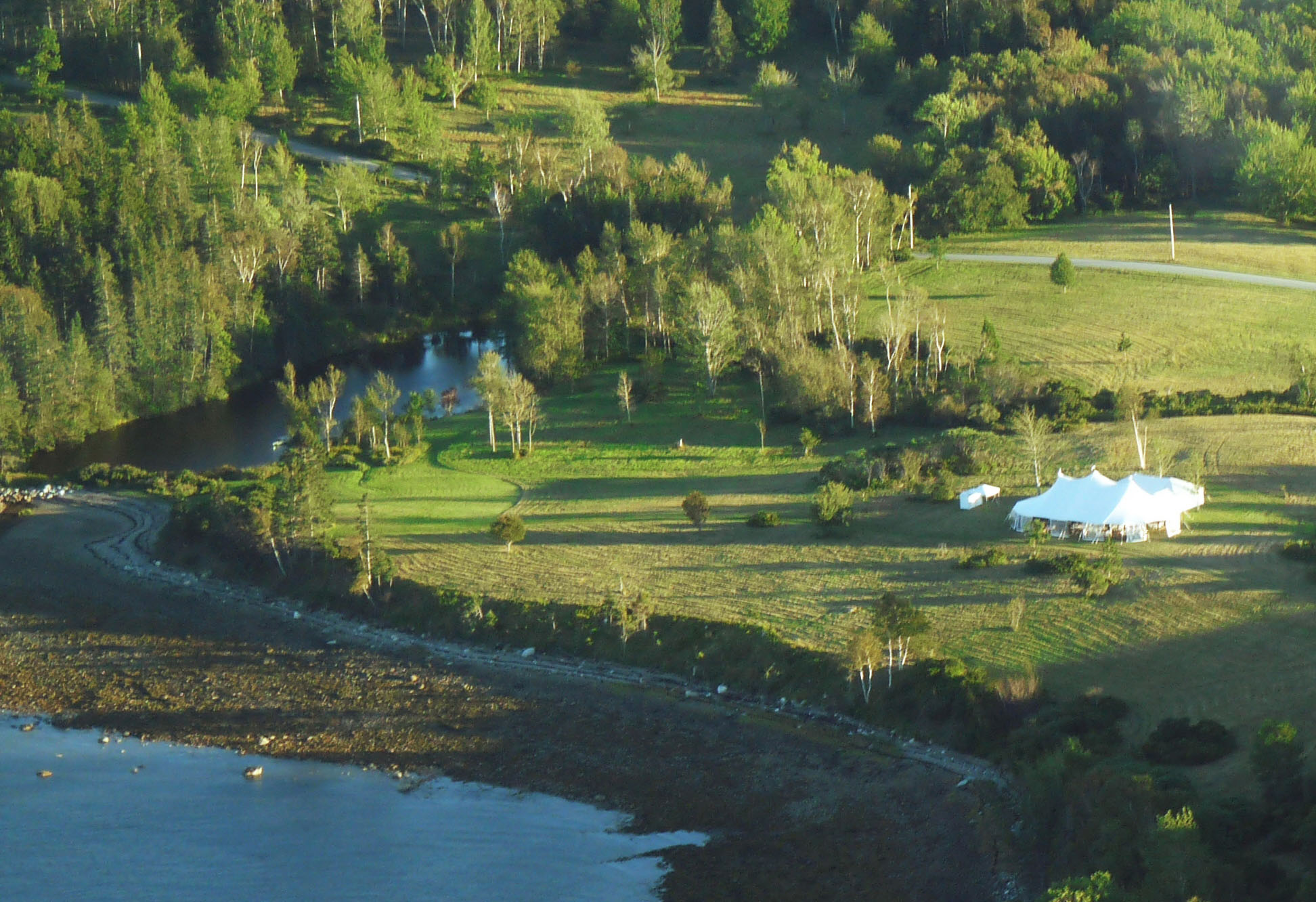 By the Shore Pond

Two houses offering different attributes and serendipities — one to be erected at the shore, and the existing Farm House nearly a mile distant — work well when hosting extended family or a multitude of friends. Each party can be thoroughly independent, or interact at will, within a completely private sphere. On North Haven, it is customary and common knowledge (but seldom explicitly sign-posted) that nobody trespasses absent owner consent, even in hunting season. 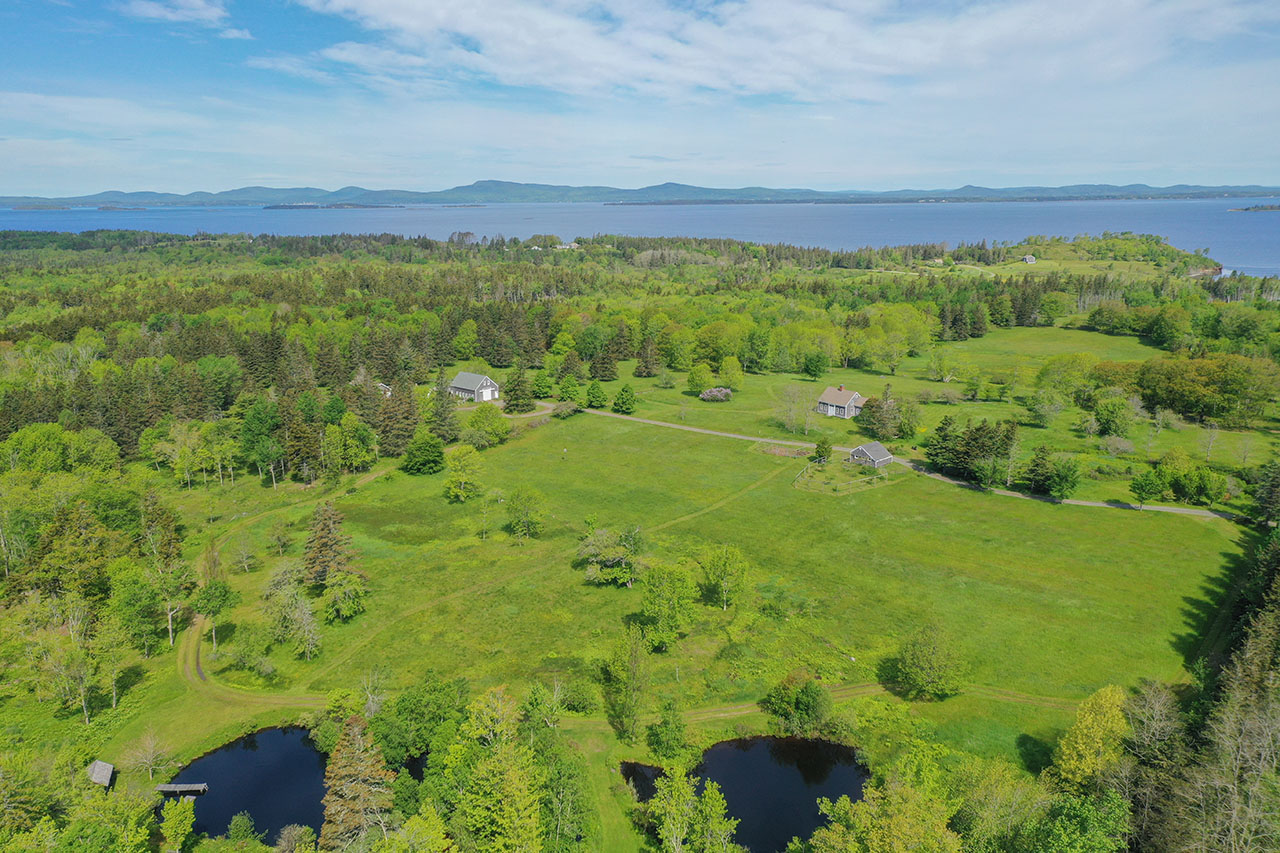