Tucked away on a sleepy dirt road, just outside the village of Brownsville, Vermont, White Fox Farm’s peaceful, country seclusion is a selling point. To this day, 230 years after its construction, you’re still likely to count more horses passing than cars. (It doesn’t hurt that the farm serves as the 83rd-mile marker for the Green Mountain Horse Association’s 100-mile ride.)

Stroll along the original, wide-pine floorboards of the home’s charming interior and there are more treasures to discover. It’s the kind of place where visitors might ooh and ah over the plethora of original fireplaces, or gaze up at the ancient, exposed wood beams before remarking, “They don’t build them like this anymore!” 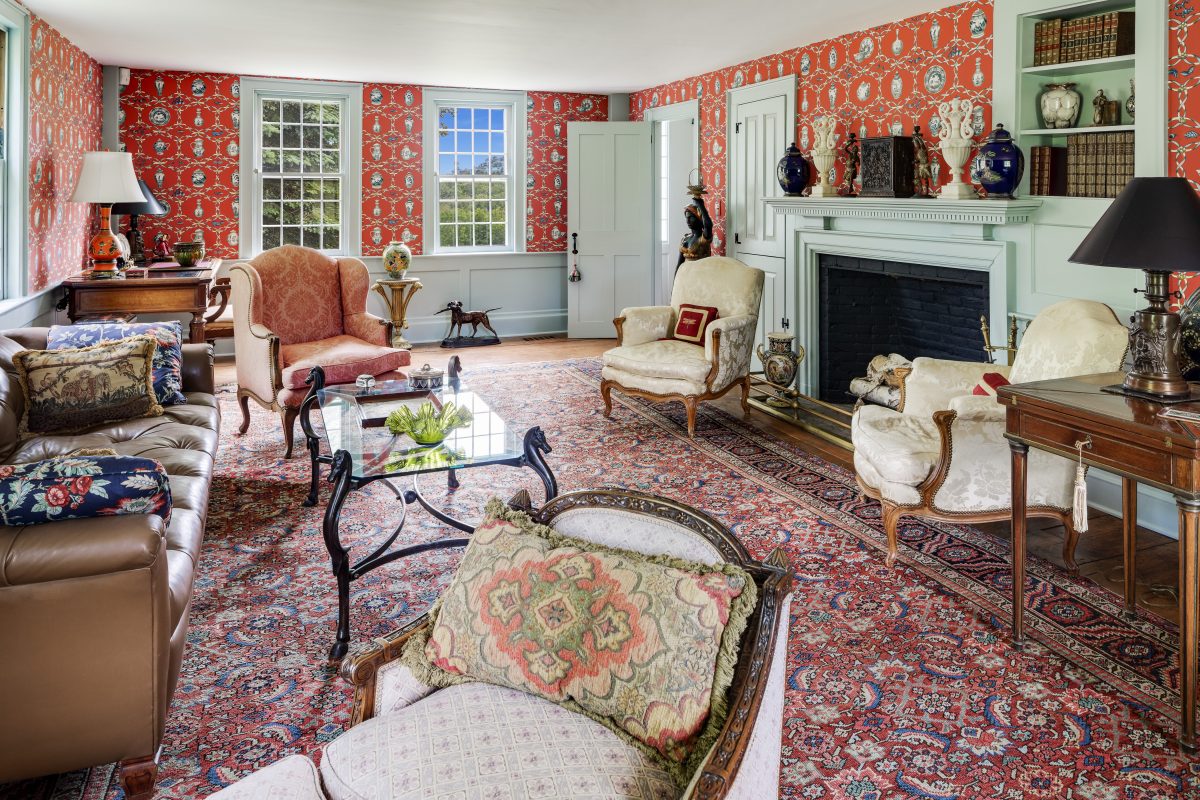 A secret chamber is found behind the living room fireplace. 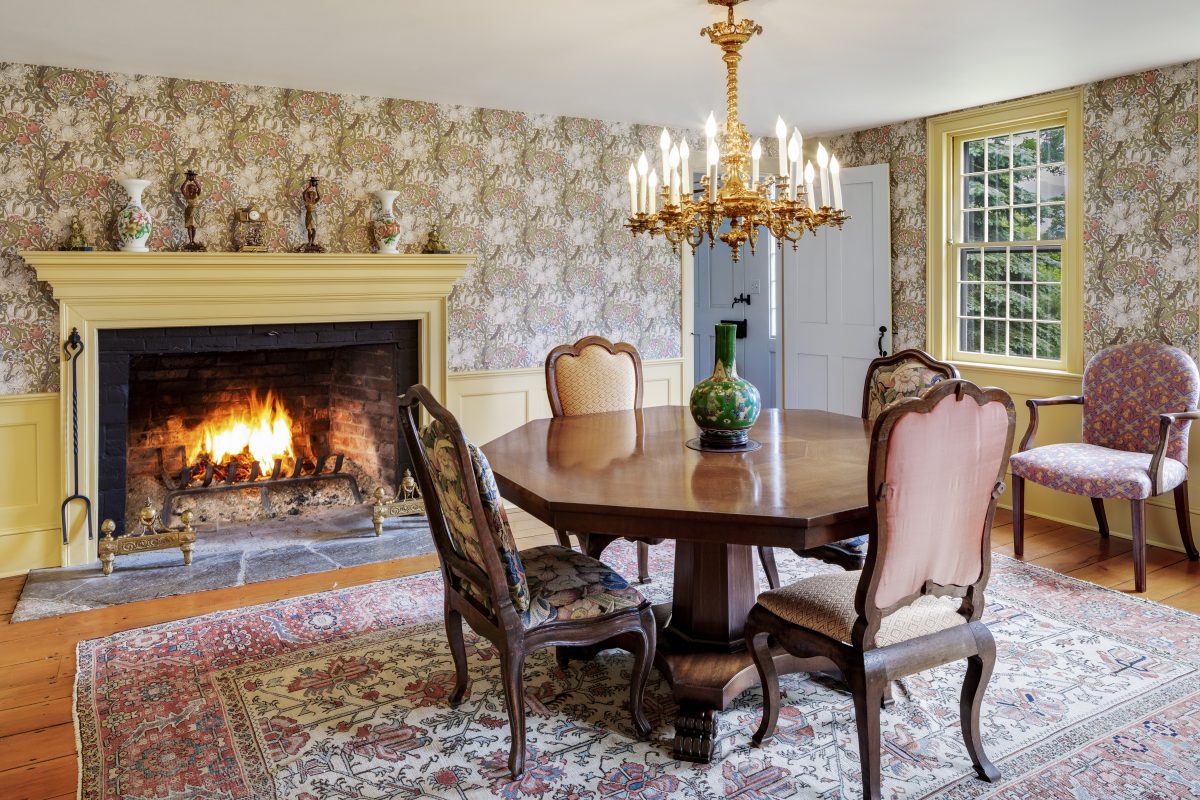 The dining room and birthing room are also part of the massive central chimney. 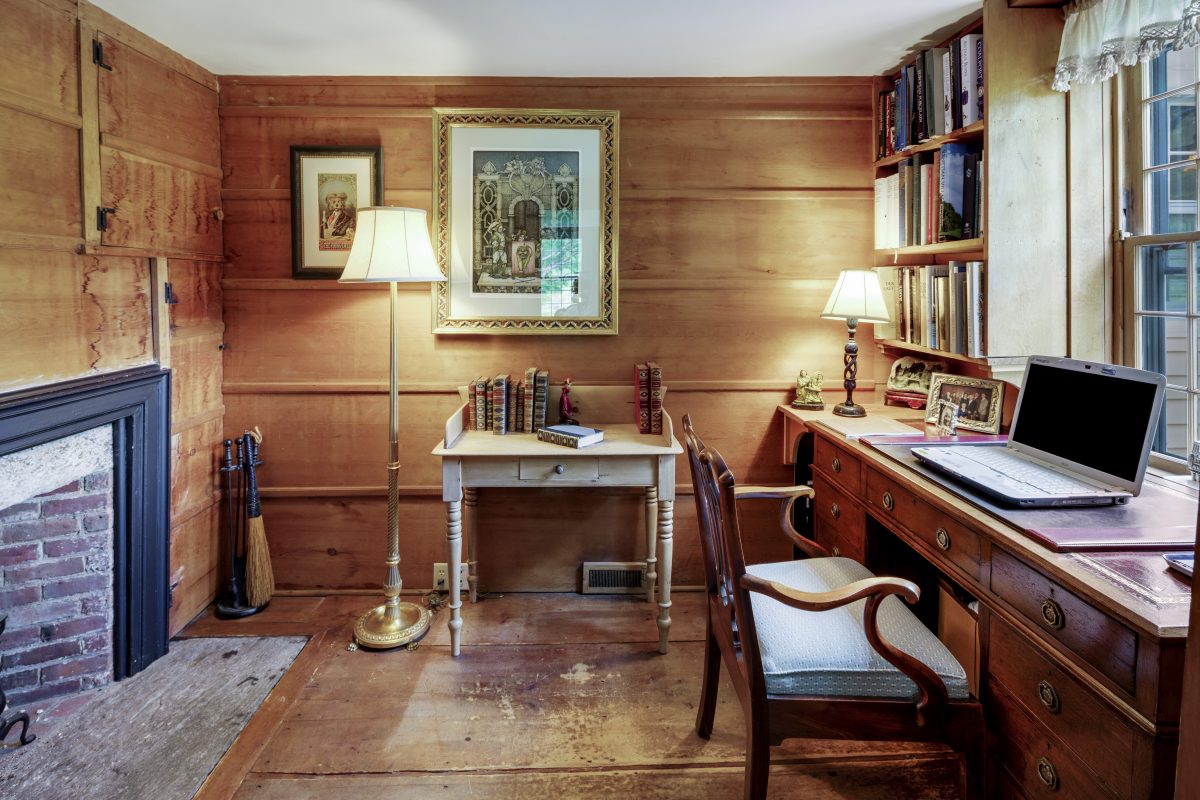 And to all these carefully preserved architectural details and bucolic tranquility, White Fox Farm brings something more intriguing…. especially when you hear about the front closet.

“This house is reputed to have been on the Underground Railroad, and there is a brochure, a copy of which is in our dining room, which states this,” says the farm’s current owner.  “This is plausible because of the secret chamber and trap door in the front closet. 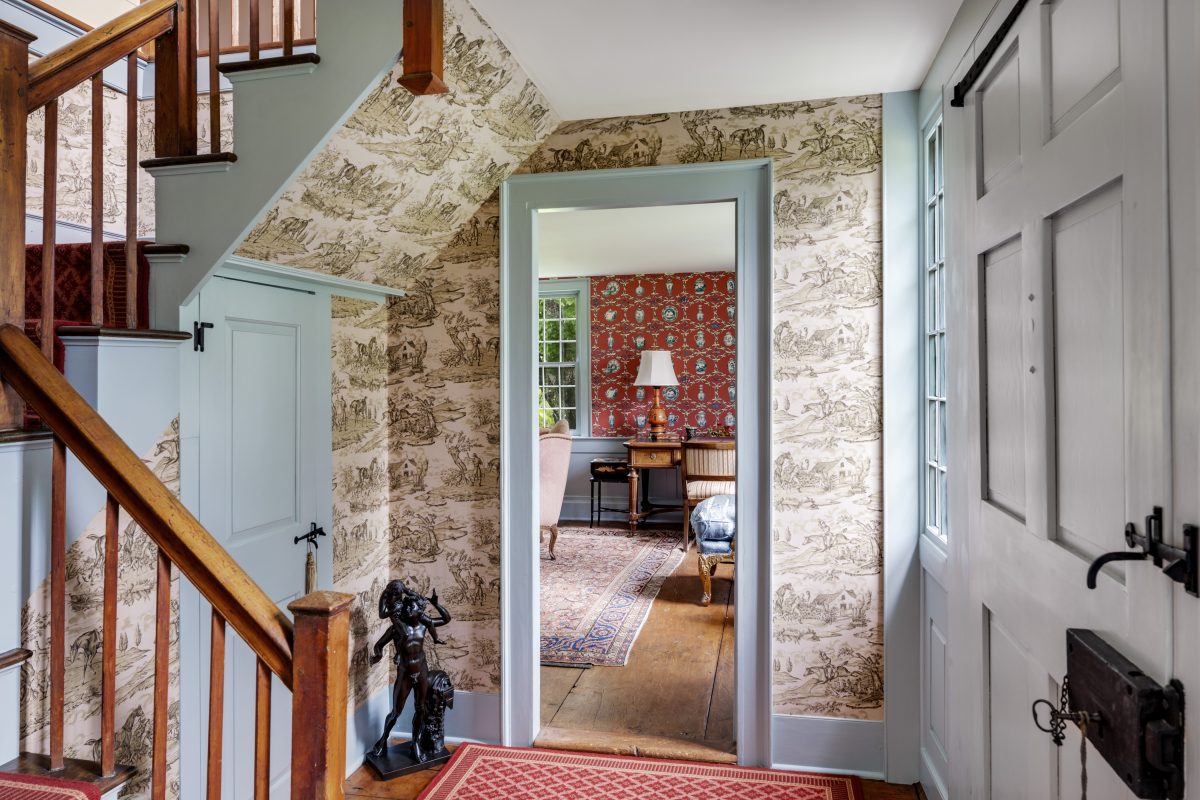 A regular looking coat closet hides a secret compartment behind the fireplace and a trapdoor to the cellar.

“Also, the house, which goes back to the 1790s, was supposedly initially an inn serving the original settlement in the area, Sheddsville, which was centered just a few hundred yards west of our house,” he continues.

Like so many owners of historic New England homes, the owner has only a smattering of historical evidence to lean on at White Fox Farm, and much of it is anecdotal. There’s a good reason for that.

“We’re ham-stringed on two ends,” explains Dr. Cheryl Janifer LaRoche, an archeologist and historian who teaches at the University of Maryland. LaRoche spoke with Vermont Public Radio’s (VPR) Angela Evancie back in 2017 for a Brave Little State piece called, “What’s the History of the Underground Railroad in Vermont?”

“First you legislate [African American] people into being unable to read or write, and then you render the primary source of their information gathering—oral— inaccurate, unstable and not credible,” LaRoche says. The historian isn’t alone in her belief in the power of unwritten histories.

“Rather than have people simply shut up, I’d rather have people tell the stories, and bring them up, and pass them onto their kids,” Historian Ray Zirblis told VPR’s Brave Little State. In 1996, Zirblis put together one of the foremost reports on Vermont’s Underground Railroad activity, entitled, “Friends of Freedom.” (More on that in a minute.)

At White Fox Farm, the current owner’s anecdotal evidence is supported by reports from the property’s earlier inhabitants. And that’s where things get even more interesting. According to a relative of White Fox’s previous owner, Ellsworth Hinton, there was, indeed, a secret closet where slaves were hidden—as well as a secret tunnel. 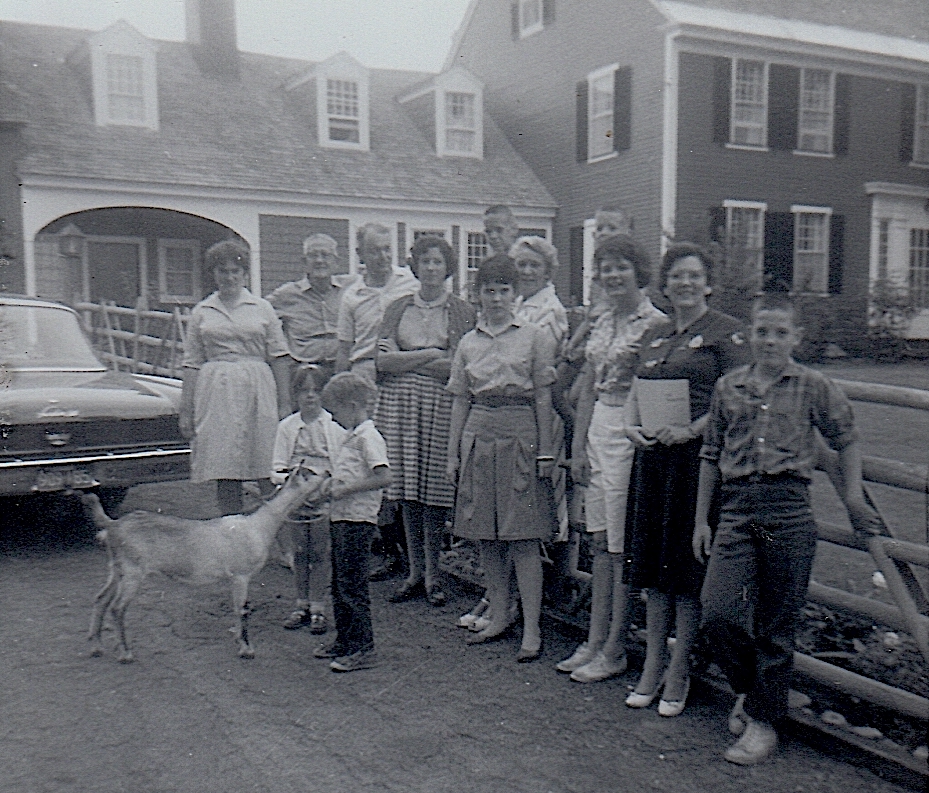 “I was there the weekend my Uncle Ellsworth Hinton dynamited the tunnel that came down to the house as part of the Underground Railway,” the relative recalls. “He thought one of us would get buried alive playing near it. The ‘slave closet,’ between the chimneys, had carpets on the walls to keep occupants from burning themselves if the fires were laid.”

As oral histories go, a local brochure and compelling, first-hand reports from former inhabitants and their relatives is, at the very least, a solid start when it comes to separating fact from fiction at White Fox Farm. But let’s zoom out for a moment.

Many New Englanders, even students of history, have grown up with the impression that closeted 19th-century abolitionists were hiding around every corner, thwarting slave catchers and spiriting escaped men, women, and children away to freedom under their floorboards or inside secret panels in the fireside library. The question is, is that accurate?

The Rokeby Museum and historic home in Ferrisburgh is one place where documented Underground Railroad activity did take place. There, abolitionist-Quakers Rachel and Rowland Robinson operated during the mid-1800s, providing aid and sometimes shelter on their farm for dozens of escaped slaves on the way north to freedom. But secret panels? Not so much.

For many Vermont historians, like Rokeby curator Jane Williamson, bursting bubbles is all in a day’s work. Yes, during the 18th and early 19th centuries, in particular, free blacks and their children could be kidnapped or re-enslaved, even in Vermont. But by the time the Robinsons were actively working for the cause in the 1830s and ‘40s, first-person accounts suggest there was little need for free African Americans, and even former slaves, to hide from anyone.

According to Historian Ray Zirblis in “Friends of Freedom,” fugitives in Vermont were “generally safe and secure at large.” This was especially true during the mid-19th century, when the vast majority of Vermonters were, for motives both economic and moral, largely opposed to slavery. It stands to reason, therefore, that the need for secret chambers, tunnels, and hiding compartments during this period would have been minimal. Even after the passing of the Fugitive Slave Act in 1850, there were no known Vermonters ever convicted for hiding escaped slaves, and only one—possibly two—credible incidents of slaves being recaptured or returned to their owners while staying within Vermont’s borders.

That’s not to say that the Underground Railroad didn’t exist in Vermont; it did. But Zirblis cautions that the “Railroad”, as it would come to be known, and as most of us think of it today, was not the organized, stop-by-stop pathway to freedom it’s often portrayed to be. “There were, as far as can be determined, no organized ‘routes’ in Vermont,” Zirblis writes. “Individuals, families, and small groups of friends sheltered runaways, passing them on to others who would do the same. Fugitives also traveled through Vermont following their own itineraries.”

Using both first-person written accounts and oral histories, Zirblis’s “Friends of Freedom” set out to quantify the number of legitimate Underground Railroad stations operating within the state of Vermont. He classed them from A to E, from most verifiable to least, and came up with 25, out of a total of 174, that could provide “hard proof” for being part of the Underground Railroad

This is where it can get a little murky for White Fox Farm. The majority of Zirblis’s verifiable Class ‘A’ structures—all but five of them—were spread out along Vermont’s main western thoroughfare. That path, which follows along what we now know as the Route 7 Corridor (and includes the Rokeby Museum, among other sites), spans north from Bennington to St. Albans. White Fox Farm, near Sheddsville in West Windsor, is, even by 21st century automotive standards, nearly an hour’s drive east of this main byway. 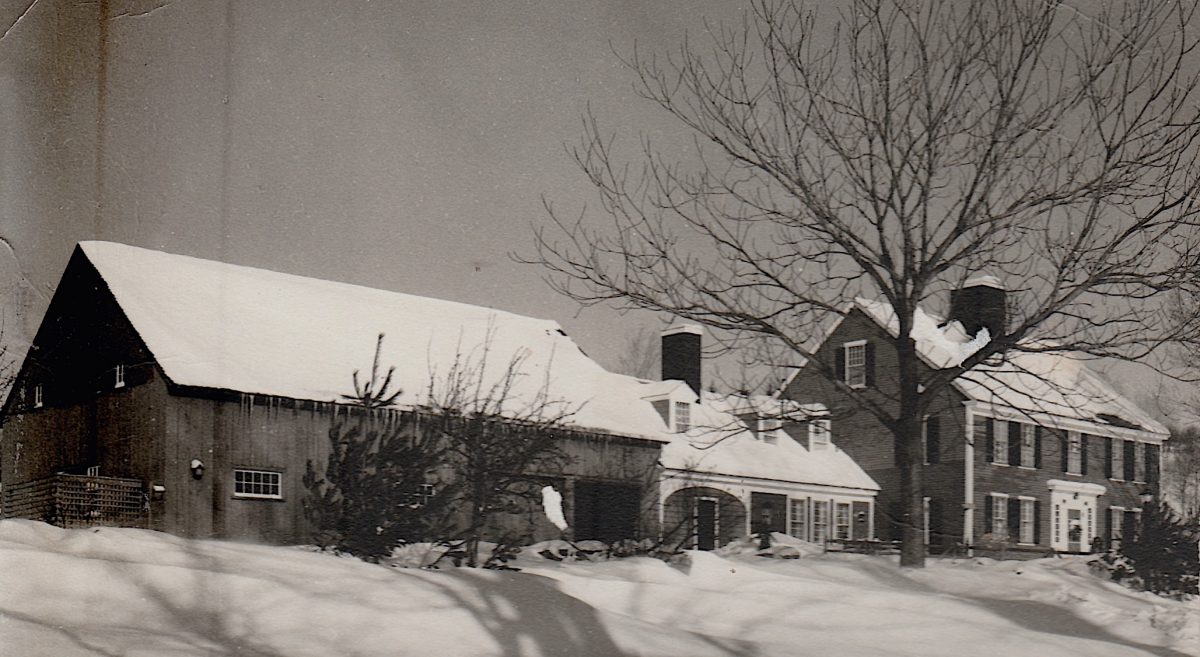 That said, although none of the five Class ‘A’ sites in Eastern Vermont with strong evidence for being part of the Underground Railroad traverse West Windsor (the closest is in Randolph, nearly 52 miles to the north), White Fox Farm is close to the Connecticut River. And according to one primary source from 1897, Joseph Poland, the ‘eastern’ fugitive transportation route in the state did follow along this particular water body.

That’s not the only fact working in the farm’s favor. According to Zirblis, White Fox Farm’s oral histories were credible enough to land it a ‘C’ classification in “Friends of Freedom,” as one of 63 possible Underground Railroad sites “found to be connected by a plausible source.”

According to Zirblis’s report, White Fox’s “Georgian plan” and “massive central chimney,” as well as the strong oral tradition surrounding its role recommend it as an Underground Railroad stop. Zirblis doesn’t mention former owner Ellsworth Hinton’s detonation of a secret tunnel. But he does credit Mary Beardsley Fenn’s 1977 book, Parish & Town: A History of West Windsor, for its mention of White Fox Farm as a Railroad station. All that is to say, we wanted to dig a little deeper.

Zirblis’s study also mentions that the farm was owned by one Bezaleel Bridge (1808-1863), a name that brought up multiple hits on a web search. According to a 1995 U.S. Department of the Interior study, entitled, “Underground Railroad: Management Concepts/Environmental Assessment,” Bridge was Sheddsville’s local mill operator. From 1848 until his death at age 55 in the middle of the Civil War, Bridge’s farm, on Cemetery Road, housed fugitives moving on to South Woodstock or Hartland Four Corners. Another source, The Underground Railroad: An Encyclopedia of People, Places, and Operations, by Mary Ellen Snodgrass, also identifies Bridge as a Railroad operator. According to Snodgrass, Bezaleel Bridge married his second wife, Emily Sophia Bagley, in 1842. “From 1848 until the Emancipation Proclamation on January 1, 1863, the couple and their six children received refugees at their two-story home at the crest of a hill on Sheddsville Cemetery Road,” Snodgrass writes. “The residence, a stagecoach stop, may have been the construction of Bezaleel’s grandfather, Abel Adams, in 1803.

“After hiding in a niche on the side of a first-floor chimney, slaves passed on to Hartland or South Woodstock, Vermont.”

So there you have it: A solid case, at the very least, for White Fox Farm, Underground Railroad stop. And that’s all we may ever have.

Barring the discovery of some long-sequestered cache of letters penned by Bridge, his wife Emily Sophia, or their children, we will likely never know the definitive truth behind White Fox Farm’s legacy. But all is not lost. Hiking along the farm’s nearby Cow Shed trail at twilight, or warming your hands by the crackling study hearth, you’ll soon discover there’s no shortage of fuel for the imagination here, indoors or out.

So, if White Fox Farm wants to keep a few of its remaining secrets to itself? You’ll hear no complaints from us. 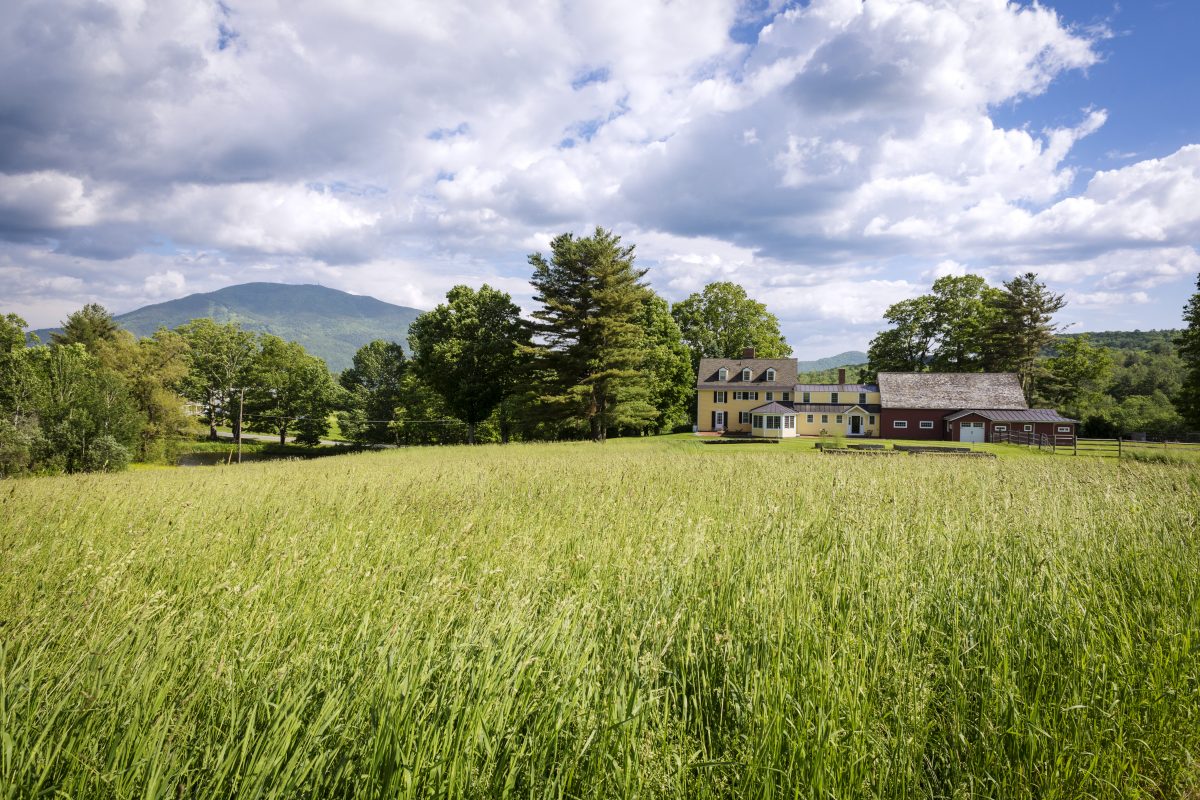 “The Underground Railroad: An Encyclopedia of People, Places, and Operations,” Mary Ellen Snodgrass