Have you ever wondered what it would be like to live in one of LandVest’s properties? We invite our owners to tell us a bit about their experience, what they love about their homes, and a bit of their history. In this case, the owners of Pulpit’s End Farm share their story of the renovation and restoration to a historic farm on North Haven, Maine.

When we bought the house in 2012, it had been lived in by one family – the Beverages – since it was built around 1830. The house was charming, but it drastically needed repair.

Starting from the outside, we secured and rebuilt the building’s underlying sills, some of which were badly rotted by years of neglect. We cut windows in the east end of the property: the end wall of what is now the kitchen. We removed a door on the harbor side, and replaced it with a door on the other side of the kitchen, opening onto a new porch overlooking the hilltop. 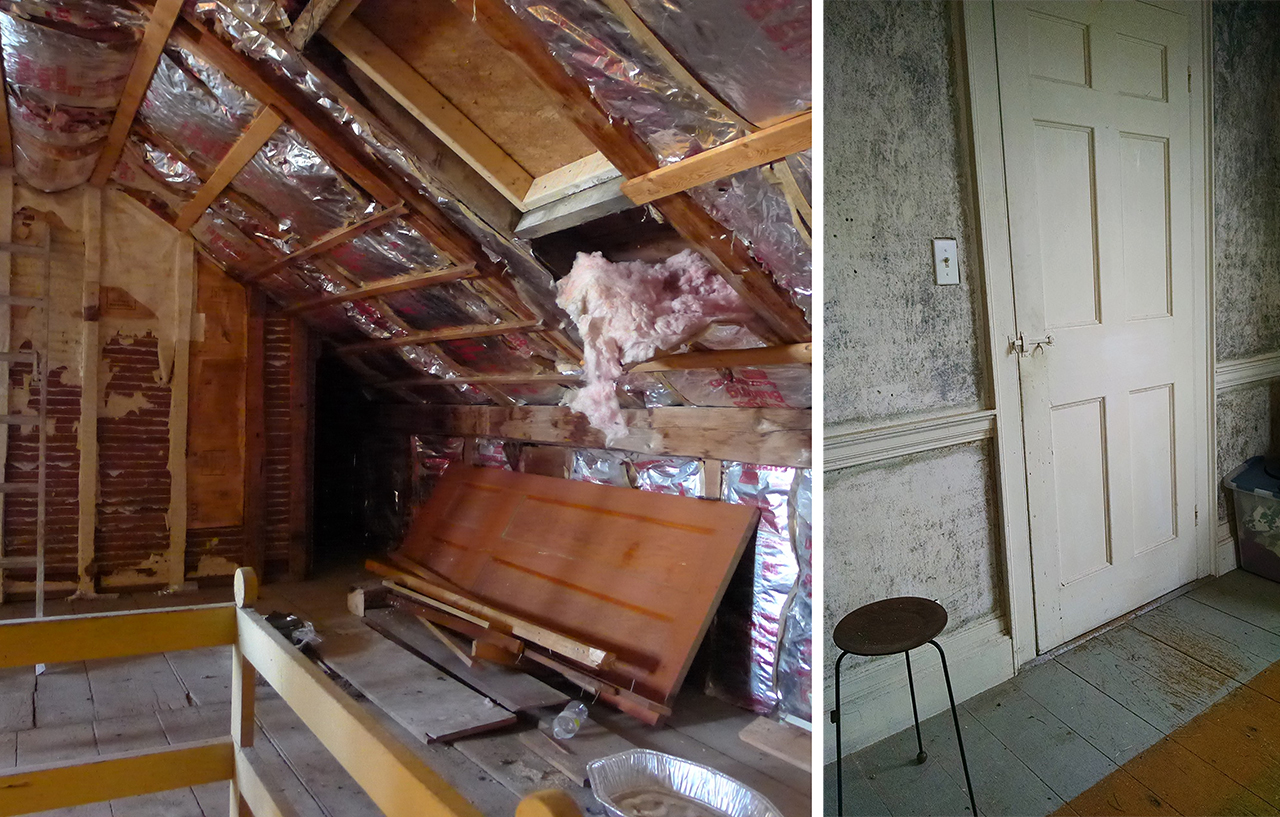 After finding an 1890’s photograph of the Beverage family posed outside, we were able to restore the 9 over 6 windows, hand-pegged and mortised by Maurer & Shepherd Joyners, in Glastonbury, Connecticut.

Perhaps the most significant restorations were the addition of the upstairs dormers and the complete basement-to-roof restoration of the chimney and three fireplaces, which we believe were in the house for the first forty or fifty years of its life. Although there remained no trace of these earlier fireplaces, the downstairs closets were placed around the core of the house, making their removal and the rebuilding of the center chimney possible. All three fireplaces – in the living room, dining room and study – work beautifully, and we thank a wonderful mason named Jeff Butterworth of Camden for carrying out this construction. Mr. Butterworth also tore the asphalt from the roofs on the main house and the barn, replacing them with cedar shingles. Later, the sides of the barn were reshingled, and a loft studio/bedroom was created – complete with an indigo painted floor and new windows. 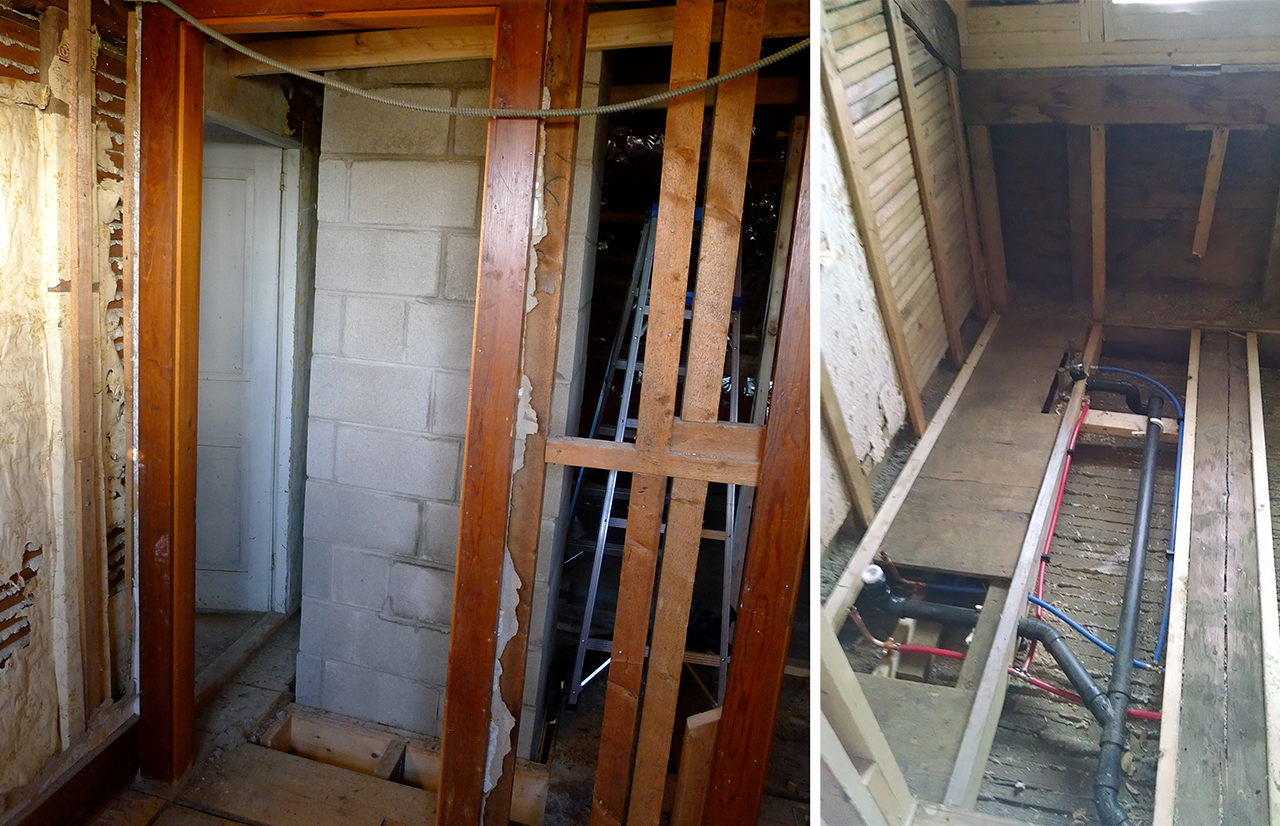 The addition of wide dormers on the main house and on the wing, both facing the fields, (which left the Pulpit Harbor side of the house as pristine as we found it) allowed for a usable second floor, lighting the Master Bedroom, the new bath and the Studio – our name for the large guest room, once an ungainly attic storeroom.

Besides those improvements, we ripped out a number of small walls in the kitchen area – getting rid of the water heater (and temporary shower) in the middle of the room – and matching half of the oak floor that had been destroyed decades ago.

We also ripped out smaller walls and low ceilings upstairs to create the Master Bedroom, refloored what had been an attic, and created a large bathroom out of what had been a small bedroom. When we bought the house, there had only been the small toilet room downstairs facing the front door. Now, there is a bathroom complete with an exquisite 1890’s oval pedestal sink, and equally antique large tub, and a walk-in shower, along with a Kohler Memoirs toilet. There are also encaustic tile floors and Lefroy Brooks English-style faucets.

In a lucky foray, we found our front door surround with its elegant columns in Albany, N.Y. We moved the thick door that linked the dining room with the kitchen, which had been an outside door before the wing was added, to make it the appropriately paneled front door flanked by the columns of the surround. We replaced the kitchen door with another antique door more suitable for the interior.

The cherry cabinets came from Kennebec Company Cabinets in Bath, Maine, and were custom designed by them. The countertops were made in Rockport from Maine granite. The 36” burgundy Bertazzoni stove cooks like a champ; the Viking dishwasher does its work near a European combination washer and dryer. The wide opening that separates the working kitchen from the gathering space is reinforced with steel.

We enjoyed restoring this gem of a mid-19th century farmhouse for ourselves, and for the next owners. 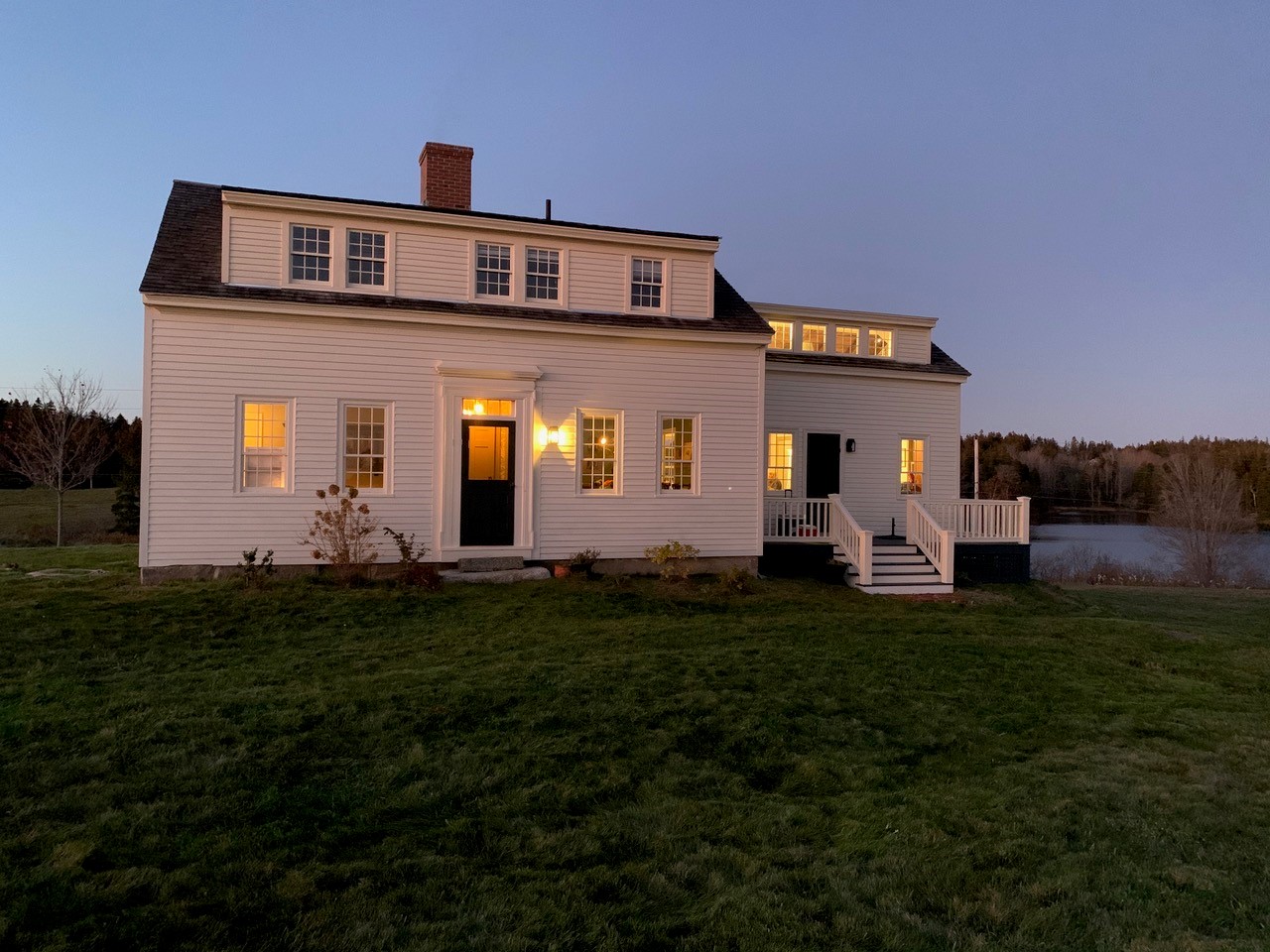 For more about North Haven, visit our recent blog which outlines a number of things to see and do.