On any map, Phippsburg stands out among Maine’s midcoast peninsulas for its southerly reach into Casco Bay. But that’s not all that makes it special. Phippsburg is well-known for its easy access to nature preserves and outdoor activities, as well as its gorgeous beaches. Lesser known for its rich history, Phippsburg boasts New England’s first English settlement among other historic sites. With New Meadows and Kennebec Rivers shouldering the 14-mile headland, scenic views are in steady supply along route 209.

History – and vistas – everywhere you look

Maine history is writ large here. Built in 1607, Sebino Head was New England’s first English settlement. Tucked alongside the mouth of the Kennebec River, Popham Colony – named after its president, George, and his uncle, Sir John Popham – preceded the settlement at Plymouth by 12 years, before being abandoned in 1608. Archaeologists began excavating the area in 1997, unearthing some 15 structures, as well as buttons, jugs, tools, wine glasses, and more. Many of these artifacts, among other records and collections preserving Maine’s important role in the founding of America, are on display at the Phippsburg Historical Society Museum.

Nearby, impressive Fort Popham stands guard and provides visitors with plenty of fodder to imagine military prep for the Civil War and other conflicts. Though never completed, construction for the crescent-shaped fort began in 1862, using granite from nearby islands.  The U.S. National Register of Historic Places lists both Fort Popham and neighboring Fort Baldwin, another coastal fortification close to the site of the 1607 colony.

While you’re at Fort Popham, look across the river to Gilbert Head. This grand Long Island home once belonged to American realist, Stephen Etnier (1903-1984). He perfected his ability to capture natural light in this area for years. (You can see his painting, Late Afternoon, at the Farnsworth Art Museum in Rockland, Maine, June 8 – December 29. Etnier’s works are also part of the collections at the Metropolitan Museum of Art and the Boston’s Museum of Fine Arts.)

Another overlooked aspect of the region is architecture.  Self-guided tours around Phippsburg and Bath will delight architecture buffs with building styles ranging from Gothic Revival to Federal Period to California Mission and Contemporary, such as this spectacular sustainable modern design, Coveside, documented in the book; At Home in Maine: Houses Designed to Fit the Land, Glass & Vanden Brink (2004). 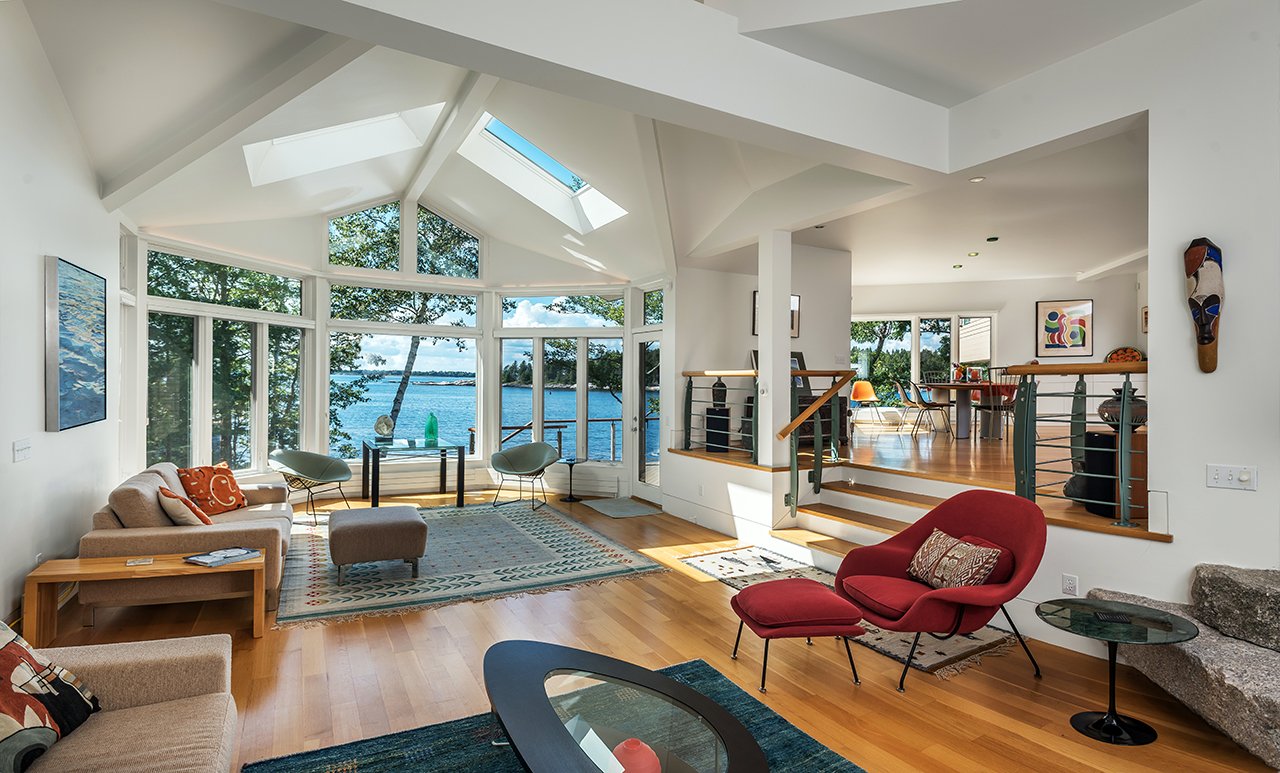 From Fort Popham, you’re a 30-minute ferry ride from Maine’s tallest and second-oldest lighthouse. Plans for the Seguin Island Light Station were set in motion in 1795 by none other than George Washington. A rare nine-foot First Order Fresnel Lens has cast the Seguin beam since 1857. The lens is the only original one of its kind still in use north of Virginia. If it could talk, no doubt it would have many a maritime misfortune to tell. From this incredible vantage point 2.5 miles from shore, sweeping views extend as far as Monhegan Island and Mount Washington.

Back in Phippsburg, there’s a historical structure of a different kind at Small Point on the peninsula’s southern tip. Established in 1895, the private social community known as the Small Point Club built an exemplary three-story Victorian stick-and-shingle building, designed by Wiscasset resident Joseph Neal. The cliff-top building overlooks a small beach, providing a place for members and guests to gather. It was added to the National Register of Historic Places in 1999.

Shrouded in mystery until recently, a shameful part of Maine history also resides off the eastern shore of Phippsburg in the form of one of the many islands surrounding the peninsula. Malaga Island was once the peaceful residence of one of the nation’s first mixed-race communities, until being forcibly removed by the state in 1912. Walk in their footsteps and learn more about their fascinating history in a self-guided tour of the pristine island.

Make tracks on Phippsburg’s many trails

With 31 miles of trails to explore, even the most energetic walkers can keep busy here. Most popular is the 3.8-mile (roundtrip) trail at the 600-acre Bates-Morse Mountain Conservation Area. It travels a service road that’s part pavement, part gravel to a stunning untouched strand called Seawall Beach. Though parking is limited and insects are plentiful, the views and the rare undisturbed beach are well worth the high-season hassle.

On the northwest side of Phippsburg, you’ll find The Basin Preserve, The Nature Conservancy’s largest coastal protected area in the state. Trails ramble through nine miles of pitch pine, hardwoods, wetlands and granite ridges, with views at the New Meadows River and the beautiful Basin, a large and secluded saltwater inlet. (Boaters, visit this lake-like gem for a swim, lunch or cocktails. Just heed your charts and catch the tide right – the entrance is narrow and the water runs just 7 feet at low tide.)

Thanks largely to the Phippsburg Land Trust, whose team has been busy securing access and acreage over the last 30 years, there’s still more trail to discover. Highlights include Center Pond Preserve with 10 miles of trails winding through woods, over granite ridges, and around a beaver pond. At Bijhouwer Forest, treasures include a mass of mountain laurel, a waterfall, and an impressive boulder called Hundred Foot Rock. At Cox’s Head, a short climb starts at a wild apple orchard and ends at the site of fortifications from Revolutionary War times with splendid views of Atkins Bay.

If you’re into fishing, you’ve probably heard about the legendary Kennebec River and Phippsburg’s other rich fishing grounds. And for good reason. The Kennebec is home to 11 species of sea-run fish. In Phippsburg, you can access the Kennebec section south of Bath from Morse Cove boat launch. Surfcasters favor Popham Beach, known for plentiful stripers as well as mackerel and blue fish. 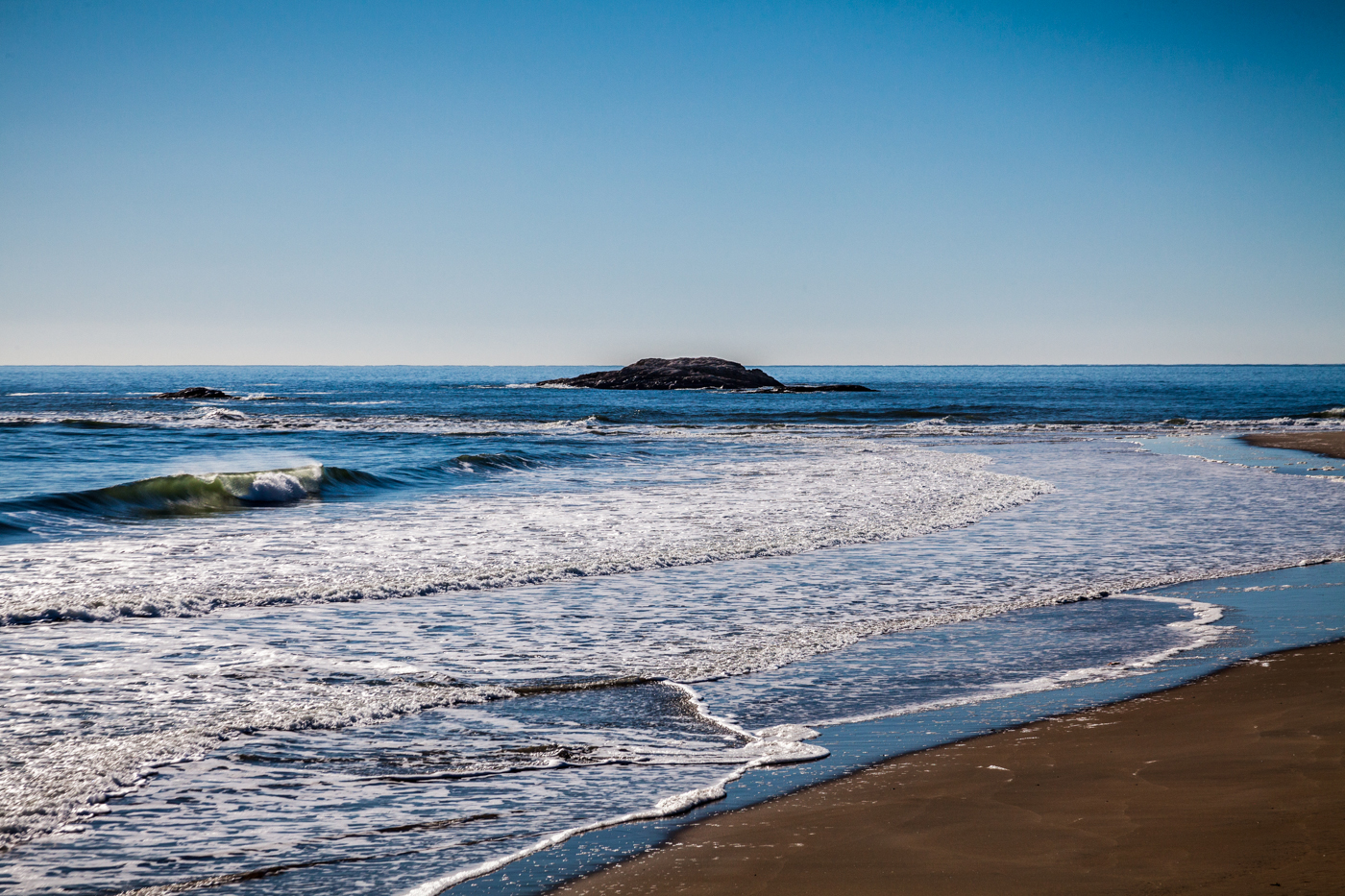 Fishing isn’t the only reason to head to Popham Beach. The expansive stretch of broad, curving beach boasts nearly all-natural surroundings. Buildings are scarce; broad ocean views, pines, and dunes are plentiful. And though it’s Maine’s busiest state park, there’s always plenty of room to sprawl out in the sand. When you’ve rested up, play in the waves or walk the sandbar to scenic Fox Island to scramble on the rocks when the tide’s in your favor (it rolls back more quickly than you might think).

Cushman’s beach is a favorite of locals for its resident-only access. A secluded beach at the end of Tottman Cove along the western edge of Newbury Point is a jewel reached by boat or taking a short trail (somewhat rugged) from a small parking lot to the west end of the beach. Birdlife, wild mushrooms and other flora abound in this preserve. 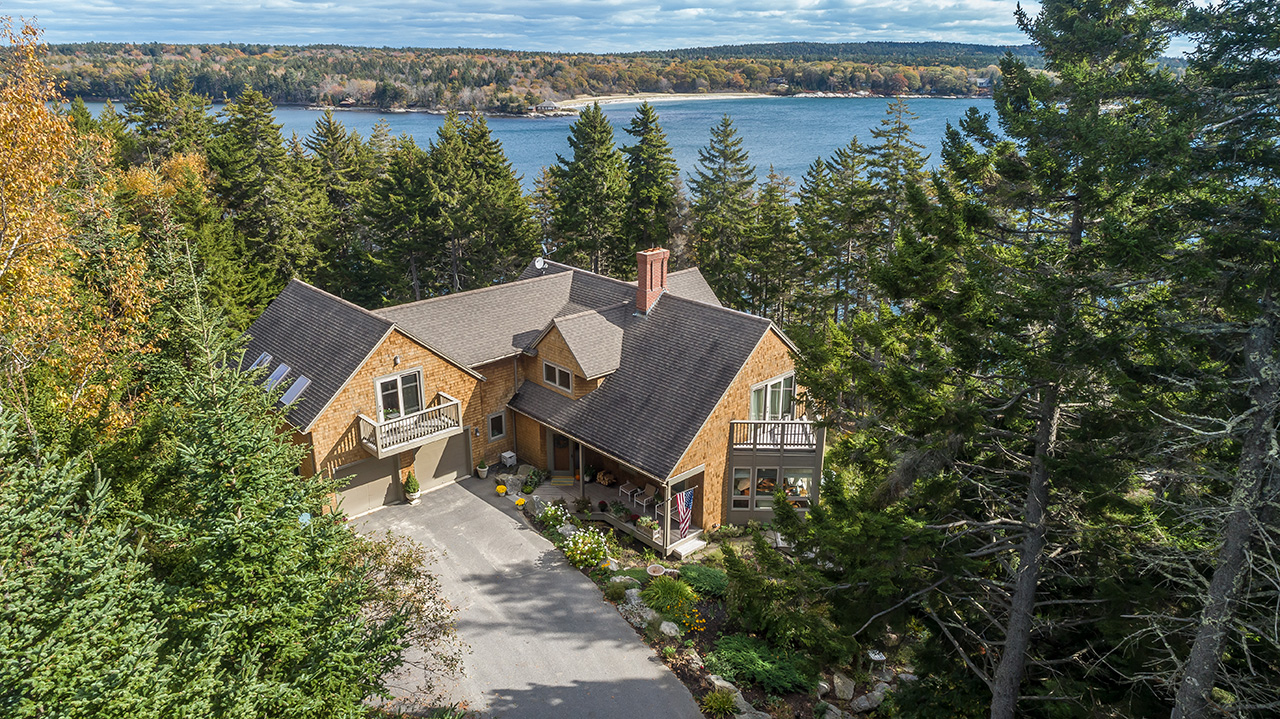 Phippsburg has much to feed the senses, as well as a few prime spots to satisfy your appetite. Winnegance Restaurant & Bakery – about three miles out of neighboring Bath – is the place to be for breakfast or lunch, whether your taste is classic or eclectic. Winnegance offers everything from hearty breakfast sandwiches and scrambles to mixed-berry bread pudding French toast for your morning fuel-up, to crab and spinach melts and pan-blackened haddock BLTs that will set you up until dinner time.

For a meal with a view, it’s hard to beat The Ledges patio at Sebasco Harbor Resort, on the west side of the peninsula. Order a lobster roll or burger and a craft brew and savor the salt air and sweeping views of the many islands, including Harbor Island with land available to build your dream home, just a 10-minute boat ride to the mainland with dock space and parking available.. (Two more reasons to keep Sebasco in mind: One, golf. You don’t have to be someone’s guest to test your skill on this gorgeous oceanside course. Two: Spillover guests. Sebasco has welcomed visitors to their 450-acre campus since 1930, and it’s handy when your own quarters are full.) 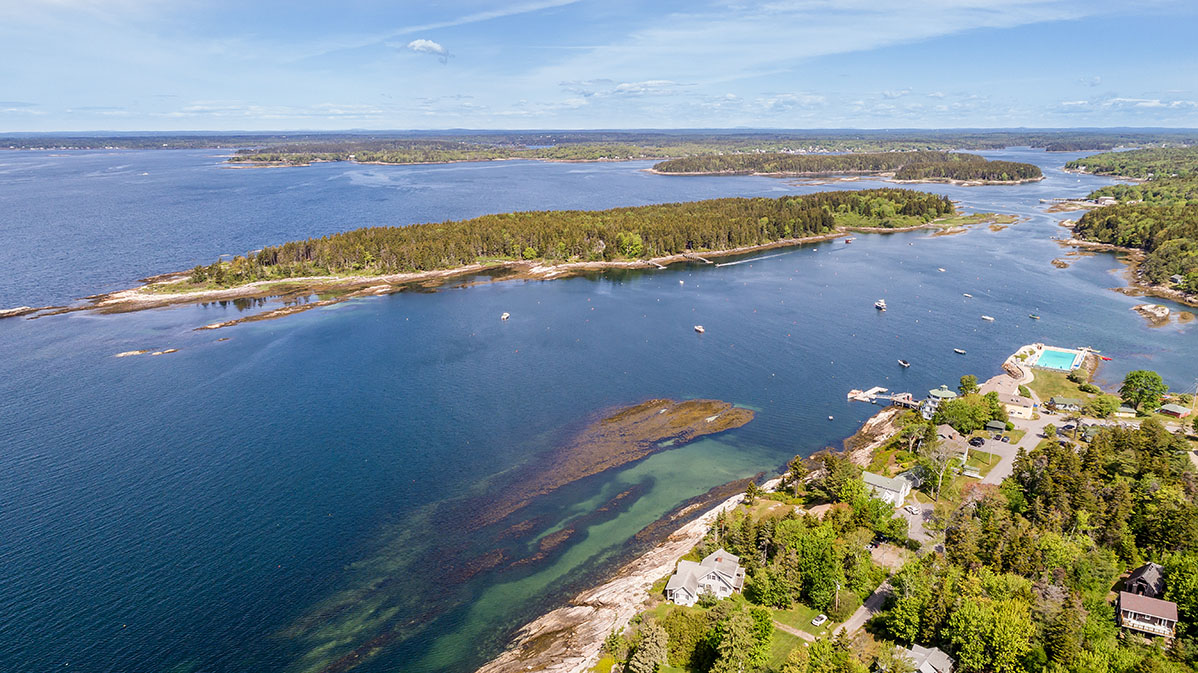 Away from it all – but not too much

Phippsburg has the extra benefit of allowing you to feel delightfully removed without the inconvenience of being too remote. Nearby Bath has every amenity. Outfit your kitchen at Now You’re Cooking. Treat the little ones at Island Treasure Toys. If the fog rolls in, head to The Mustard Seed Bookstore for new material. Or, delve into the state’s seafaring history at the Maine Maritime Museum, where you can explore the shipyard that produced the largest wooden ship in U.S. history, the six-mast schooner Wyoming, and hop aboard the Mary E, a restored 1906 schooner. Savor a Maine-sourced meal at Salt Pine Social. For more casual fare, dig into what many declare is Maine’s best pizza at The Cabin, across from Bath Iron Works, where many of today’s leading warships are built on the Kennebec.

There’s plenty more to explore just 40 miles south in Portland, as well as up the coast in and around Camden. It’s easy to see why Phippsburg should be on your short-list of places to call home in Maine .

Welcome to 2020! We ring in the new year and decade with energy and enthusiasm, grateful to live and work in one of the most beautiful regions in the ...
Midcoast Maine Newsletter